See Paris through the eyes of the Impressionists !

Up until the mid-XIX century, Paris was a city of narrow streets and unsanitary buildings. But in 1840, Paris sprang out of its medieval walls (the Mur des Fermiers Généraux) to reach its current extension. In only 20 years, Napoleon III and the Baron Haussman created the City of Light that you are discovering today.

Just a few blocks away from the Louvre Marsollier Hotel, the Grands Boulevards became a promenade favorite. The train stations were built, the métropolitain was born, and the first department stores opened their doors.

This new industrial Paris became home to the thriving Impressionist movement. Today, you can travel one century back to Impressionist Paris thanks to over 120 paintings and drawings that the Musée d’Orday (currently under renovation) lent to the Paris Hotel de Ville.

On the mezzanine of the majestic Saint Jean hall – a XIX century heirloom itself – you will witness the metamorfosis of Paris through the eyes of Monet, Vuillard, Caillebotte… In the nave, Parisian modernity comes to life in Degas’s Opera, Manet’s Cafés-concert and Van Gogh’s Montmartre.

“The 1871 Commune of Paris”, exhibition in the Salon d’Accueil, entrance free. 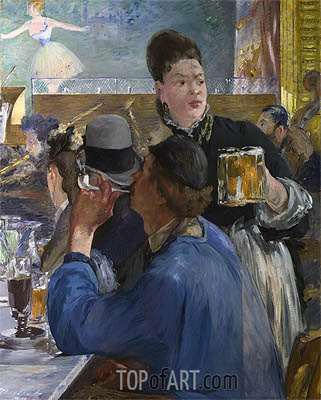